Not on my watch! A working meditation story about recycling.

The first week of April I participated in silent vipassana retreat at Spirit Rock Meditation Center in Marin county. It’s a beautiful sanctuary in the foothills east of Point Reyes National Seashore that’s been around for about 25 years.

Of course, there was sitting meditation and walking meditation, and for me the first couple of days, running meditation until I wore off some excess neurotic energy and could settle down.  There was also Working Meditation which involved the upkeep of the center, tasks cleaning up after the 80+ retreatants, and of course the kitchen work–everything involved in feeding everyone, and all in silence.

I selected what was arguably the least attractive task of all, since there were no other volunteers but the task is slated to have two do it: recycling and composting.  I did it because I was very interested to see what processes were in place to minimize the enviro impact of this large group of hopefully mindful meditators.

I inadvertently asked for more than I bargained for since the one thing they left off the title of the task was “Garbage.”  That’s right, dining room garbage collection, recycling and composting.  I was bummed the first day and certain that this level of real work would destroy any chance I had at peace of mind.  😉

As it turned out, the garbage collection part became the most intriguing.  The instructions I was given was to avoid using too many of the large plastic bags since, of course, plastic bags are forever.  I took this instruction to heart immediately, vowing secretly to myself that no more than one large plastic bag would be used per day…for well over 80 retreatants and 30 staff.  Three meals a day.

Could it be done?  Indeed it could.  I aggregated everything I could, without putting back messy bags for reuse.  How?  Well, the retreatants became very adept at and willing to scrape their plates clean into the composting buckets, and as the week wore on, they seemed to take no more than they would actually eat, making even less compost, and certainly very little garbage.  Therefore, the only thing that went into the garbage were things like unrecyclable tea containers, plastic wrappers (not many of those), and other kitchen packaging that couldn’t be recycled.  The recycling was very thorough, boxes broken down and picked up en masse, and one large container for most everything else.

The composting consisted of rotating buckets with lids that were picked up daily and taken to a cycle of seven large bins with contents in varying states of vermiculture.  The end product is then worked into the gardens and grounds for a lush environment. 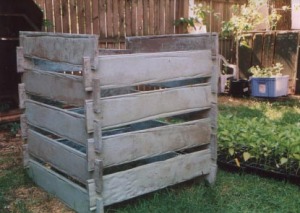 In other words, there wasn’t much garbage.  Hard to imagine in our throw away society, right?

So, I was able to keep to my vow of no more than one large hefty-style bag of garbage per day for a retreat of over 100 people.  I’m skimping a little here, because I know the kitchen had its own process that I didn’t participate in, but basically, the process was enviably efficient and effective. And quiet.

I learned to truly enjoy my work meditation.