I just finished reading Better Off by Eric Brende who, a decade ago as part of a graduate project, went from MIT to OTG (off-the-grid) for 18 months with his wife, and amidst it all, new baby. 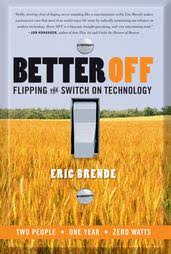 The book is based on his journals from that 18 month period and has a ton of really interesting anecdotes and observations.  Bottom line: he really never came back to the machine-and-technology world.  He didn’t stay in the zero-watt Mennonite community he joined for the project, but he and his family learned they quite liked a life with very little technology and have over the years built a lifestyle that suits them really well.

The end of the book has an epilogue that is markedly different in tone from the rest of the book in that it takes a sober look at his conclusions–no folksy tales about how and who and why and when in the country. A very stripped down appraisal of the True Cost of how we live–and the True Cost is high, make no mistake.

Interestingly, he gives a nod to the internet he uses at the library and how it allows him to reach a larger audience for trades, barters and such.

It’s worth the read.

Update on Plastics….the only permanent thing in the world

Msjean noted in a comment yesterday that the UN is taking up the cause of plastic bags, so I checked it out and indeed: the topic is being discussed.

In this article, the UN Environmental Programme put forth some uncomfortable information:

Although recycling bags is on the rise in the United States, an estimated 90 billion thin bags a year, most used to handle produce and groceries, go unrecycled. They were the second most common form of litter after cigarette butts at the 2008 International Coastal Cleanup Day sponsored by the Ocean Conservancy, a marine environmental group.

“Plastic, the most prevalent component of marine debris, poses hazards because it persists so long in the ocean, degrading into tinier and tinier bits that can be consumed by the smallest marine life at the base of the food web.”

Plastic is Forever.  Lately I’ve been thinking about things like cassette tapes, video tapes, walkman devices, pens, sunglasses, drinking cups, those little wrist things used for ID in hospitals–all of these things made out of so much plastic and that are doomed to be discarded because they are no longer useful, outdated, unpopular, temporary, whatever.  The funny thing: we think of Plastic as temporary, but it is in fact the most permanent thing in the world.  That’s not an exaggeration.

Look around yourself right now, how much plastic can you see?  Now ask yourself: where will that end up?

Anyway, thanks msjean for pointing me to this news.  Much appreciated!

The other day I was paddle boarding around the bay in West Seattle. At this time of year, we have extreme low and high tides, and the slack tide in between tends to be the collection point for a lot of garbage in the water. Even as the day was lovely, the paddling exquisite, I kept coming across a disturbing pattern: big globs of muck that were built out a tangled mess of fishing line, 6-pack ring, seaweed, plastic bags, algae, bungee cords, dead fish, feathers, plastic bottles, unidentified gunk and plastic food containers. The common ingredient: plastic. And there were a lot of these little floating islands.

These congealed half-bio-half-plastic masses are very quickly becoming ubiquitous in our oceans. If the only damage were that of the scenery, I could almost but not quite shrug it off.

The damage is much, much worse. In fact, you could say that what I was seeing off Lincoln Park was just the barest tip of an iceberg.

Sierra Magazine has an article this month entitled “Message in a Bottle” and it’s worth a few minutes to read. Gird yourself, you may not be prepared for the story:

The thing I can’t get out of my head, the thing that haunts me is how much plastic there is. We really don’t even think about plastic as plastic anymore, we think of it as normal. Diamonds may not be forever, after all they are organic structures, but plastic really IS forever. Where will all of this stuff go, this stuff that really IS forever?

In my own little life, we have upped our efforts to decrease the amount of plastic in our lives, but it’s an uphill battle. We reuse our plastic bags and buy in bulk as much as possible, we forego the plastic cap on the latte, we avoid the over-architected containers.

And we have to content ourselves with that. It’s not enough, but it’s something we can do.

The clean-up on this mess will be monstrous; if we started today, we could have 100% employment for decades. The one upside to this is it’s undeniable: the massive three-times-the-size-of-Texas floating islands of garbage are real. You could go there today and be blown away by the iceberg-depth and island-breadth of the mess.

Recall the famous scene from The Graduate:

Mr. Maguire: Ben. I just want to say one word to you. Just one word.

Mr. Maguire: Are you listening?

Plastics. That’s Mr. Maguire’s advice for Ben about his bright future. Of course he was right, even if the full blossom of Plastics has taken many roads and many incarnations. This weekend I was at my nephew’s house and was reminded of this scene in The Graduate because this home, average in many and good ways, has 3 kids and 2 adults and there was more plastic in that house than I’ve seen perhaps ever.

And while most of the plastic may well be useful (who am I to judge the harried life of young parents), there was one area that struck me not only as dumb, but not even useful, and in fact sort of…well, icky.

The shower, the sinks, the kitchen–there was not one bar of soap to be found in the house. Every last bit of soap in the whole house was dispensed out of some kind of plastic container that was most definitely a use-once-and-toss device. That’s right: dozens of bottles throughout the house, use once, toss into a landfill. And I’m not talking about one container per “wash-station”–there were three or four. In the bathrooms there were maybe as many as 15 or 20 containers. Each with a limited life, each destined for a landfill.

I took a shower and had to use a bottle of body wash that was sort of gummy and actually not useful to me–certainly not as easy or useful as a freakin bar of soap would have been. And of course, when you get near the bottom, the container is even more irritating since the goo inside moves so dang slowly, so out it goes and in comes the new replacement: another plastic container of goo.

People: bars of soap have worked really well for so long, really! They’re simple, and once used, they don’t go in a landfill. There’s every flavor, scent, texture, what have you. So I’m wondering: what’s with the containers of goo? How have you been sold on the idea that those plastic containers are better than a bar of soap?

The generation coming up? This is the plastic generation, the full flower of Mr. Maguire’s vision from the 60’s.

Unsubscribing from catalogs: tis the season where this questions becomes obvious

Post-script on this issue: My pal Diana sent me a head’s up that there is an opt-in green initiative for customers to request that companies no longer send catalogs. It’s called Catalog Choice and is a Green Certified site. I went there, signed up on their secure page, and was able to request that Dell no longer send me catalogs.

It will take 12 weeks to process, but hey. It’s notable that Dell has opted in to participate in this program. Other companies, such as Land’s End, have not. So you’re at the mercy of the company’s own sense of marketing fairness or internal processes, whichever.

Thanks Di–much appreciated, since the Dell (bless their hearts!) catalogs were really the nagging irritation!

I do not blame companies for trying to make a profit. That’s what they’re there for. I do get irritated, and especially so this time of year, when I get dozens and dozens of catalogs that don’t even make the cut to a save-for-later pile–they go straight into the recycle bin, unopened, and certainly unappreciated. Dell is a big one that comes to mind: we are a mac household. It’s ridiculous for them to send all these catalogs.

And how many trees gave their lives for this instant recycle fodder? Is the catalog industry involved in recycling and is the production of catalogs therefore job security? You gotta wonder.

Lifehacker posts an article today on the questionable practice of sending catalogs to anyone who has ever lived or used a product. The excellent query: why can’t we easily unsubscribe from catalogs? We should be able to–not only because the constant irritation of receiving these things actually does nothing good for their brand but also because they involve us in unenvironmental behavior that for some of us is pretty disturbing.

I say: do the right thing. Make it easy for us to opt out–put a link on your site that allows us to go there and opt out. We’ll remember you kindly in the future.

Plastic bottles: dumb stuff we do

Last Sunday I ran a 5K (Fred Hutch Shore Run) down along Lake Washington Blvd to Madison Park–gorgeous run, beautiful hot morning, a real summer event.  That area is one of the prettiest in Seattle, lots of character and lazy summer lakefront vistas.

Once over the finish line, I was directed to the predictable tables of food and sustenance.  Wasn’t much interested in the food (though the fresh fruit was good!), but I did want some water.  Talking Rain was there with lots of chilled bottles of water–bless them, I thought.  I downed one, and wanted another immediately–it was a pretty toasty morning for Seattle.

So I went back to the Talking Rain stand and before I picked up another, I said, “Where’s the recycling bin?”  The guys looks sort of sheepish and says, “I don’t think we have recycling.”

I’m dumbfounded as I look at the long table full of chilled bottles of water, and the boxes stacked behind him of more bottles, and I say, “Come again?  Seattle is one of the few cities that will recycle plastic bottles and you don’t have a recycling bin?”

So I look all around the whole grounds for a recycling container and can’t find one.  That means everything produced and tossed away at that event would go straight into a Land Fill.  Thanks Fred Hutch, but even 3 garbage cans for recycling would have helped a lot.  And thanks Talking Rain–especially you, since these are your bottles going straight into a land fill.

Unacceptable.  Especially in a city that is fast becoming a leader in Green Thinking–from Mayor Nichols, who has banned bottled water from being sold in government buildings and who has initiated so many green projects, to its citizenry who pay a little more to include green energy in their electric service.

So, in the end, I toted my two bottles home and recycled them in our bins.  Better yet, next time I’ll stick my own water bottle in the freezer the night before and ask my partner to hold it for me at the end of the race.

Little things maybe, but they add up.