Pal Jodene showed up in West Seattle today after traveling to Bellevue from her home in North Seattle. I don’t know how many miles that is but it’s a lot, so she is my hero today. She noted that it’s funny how going from her home in North Seattle, all the way around the north end of Lake Washington into Bellevue was a measly buck twenty-five, while traveling from Bellevue to Seattle was a whopping 2.50–a two zone ticket. She wondered why, I suggested because two major shopping areas equals two different zones.

Tomorrow I’m heading to the Fremont district, north of downtown. I’ve toyed with the idea of bussing it but am a little intimidated by the idea. Jodene has thrown the gauntlet down and I’m feeling I must answer the call. I wonder how many zones that is, from West Seattle to Fremont, home of the Lenin Statue and all that is truly funky in Seattle.

The end of summer is at hand around here, the rains have started and the temperature is chillin’. It’s a funny mixture of relief that things might quiet down a little, and sadness that the beautiful long summer days are behind us. For MLwC, I’m entering a new season and will see how this impacts my alternate transportation plans. Riding a bike in the rain isn’t all that bad, but not all that fun either. But, who knows? Most everything I used to think about transportation has changed in the course of this project, so we’ll see.

Speaking of driving. I was transfixed the other day, checking out the size of the gas cap on a Hummer. Seen one lately? I know, I know–Hummer’s are so overwhelming in general, but check it out next time you’re next to one of those monsters, waiting for the light to change. The gas cap itself speaks volumes (it’s Huge). 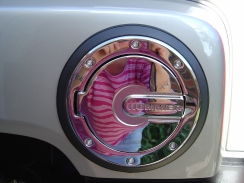